When hurricane Sandy tore through Staten Island in 2012, day laborers were among the first on the scene.

About 15 organizations from across the Tri-State area formed day laborer brigades, who went door-to-door on Sundays volunteering to clean up people’s homes.

“We had an instance with an Irish family, I remember,” says La Colmena ED Gonzalo Mercado (who at the time was ED of El Centro del Inmigrante). “We got to the door, and said we have a group of six workers who can help you, because they were trying to get stuff out of the house, and cleaning up. Originally they were very suspicious. Thinking who are these brown people coming into my house, you know…

“And then very hesitantly they said ok sure, they can help us. We came back around six o’ clock to pick them up, I mean those people were crying, hugging these workers, it was so incredibly moving. And you know that experience with them is going to last forever.”

Day laborers played a crucial role in relief and rebuilding, just as they have in so many climate-related disasters across the country, from the multiple hurricanes of 2017, to the recent wildfires in California.

The CUNY report “Day Labor, Worker Center & Disaster Relief Work in the Aftermath of Hurricane Sandy” describes workers’ exposure to hazardous materials and unsafe working conditions, the lack of preparedness for the storm, and the combination of ignorance and negligence on the part of many homeowners and contractors.

Important advances have been made since Sandy.

Worker centers and organizations such as Make the Road joined forces to increase OSHA health and safety training. La Colmena can now provide these trainings monthly, and has a train-the-trainers program so that their workers can become certified themselves. Another breakthrough is that the City now formally supports a network of five day laborer centers, one in each borough.

The frequency of storms and surges will only increase. Mercado believes that much more can be done, including making sure that day laborer centers are fully-equipped with emergency response equipment like generators.

La Colmena is strategically located next to Staten Island’s two major day laborer “corners” – two of around 35 across the city where workers wait for contractors to pick them up for construction jobs. One of the center’s many roles is issuing contracts between workers and employers. The members work on a wide variety of jobs – from local landscaping in gardens to working on luxury towers in Manhattan.

The winter months are particularly tough for some workers, when landscaping work slows right down. Some fall into homelessness and substance abuse, just as the weather is at its coldest. In January, a 25-year-old member died.

The workers regularly face wage theft, workplace accidents, and discrimination.  A “wall of shame” by the door lists contractors with bad track records as a warning to avoid them. 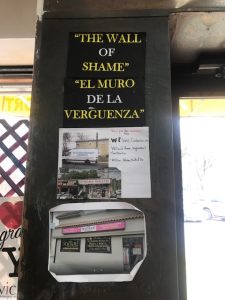 Mercado cites the efforts of the Manhattan District Attorney as a major advance in holding abusive contractors accountable. Cyrus Vance is leading the way in issuing criminal penalties for wage theft, and for safety lapses that cause accidents and deaths.

“That’s what we need to see more of,” says Mercado. “That’s the only way that developers and construction companies are really going to understand that our workers are not disposable workers. That saving here, saving there, or producing a job in a shorter time, has its consequences. It can’t be just profit. We are playing with the lives of workers.”

Mercado also sees an opportunity to raise awareness and educate the broader public and building owners. Some of the construction sites are “townhouses that go for millions and millions of dollars,” he says, “So you think at least they can take care of the workers who are building them”.

In the future, one approach could be issuing grades – similar to those used for restaurants – to building sites or developers.

“We have a situation that’s like a no-man’s-land with developers and contractors. You are always going to find the contractors who are charging the cheapest, developers are going to go with them.

“So how do we change that culture? It’s not only unfair for workers. It’s unfair for the good developers, and good contractors, who do want to do the right thing, but are being undercut by these other guys.”

Mercado also emphasizes the need to strengthen the pathway for worker center members into union jobs. In many ways the role the worker centers are playing, he says, is providing a space for organizing, for access to resources, and training, for workers who could potentially be part of a union. Despite challenges, he says that there “has to be a way”.

“These family reunions have been eye-opening,” Mercado says. “Family members come and see the conditions in which their relatives live, and see that the dollars are not hanging from the trees, and that they barely see [their relatives] because they are working 12 hours a day. It’s not like the beautiful photos that people see on Facebook about New York. There really is a sacrifice that people are making.”

La Colmena is studying the impact of remittances in towns in Mexico and looking at root causes of migration, while also advocating for immigration reforms that will benefit members here in the US.

Members are also exploring creative ways to build a collective economy. La Colmena was one of the many organizations that testified at last year’s “Joint New York City and State Hearing on Economic Democracy”.  For example, what are the ways that members could join together and become home owners, rather than living perpetually in rented accommodation with all the risks that entails? Are there ways in which a large group could pool money so they can all be part of a cellphone plan?

In other words, says Mercado: “What are the opportunities for us to use that collective power and envision a different economy, an economy that is more inclusive, and based on values.”

Support the passage of Carlos’ law in the NY Senate, to increase the fines and penalties developers face for safety infractions that lead to the death or injury of a worker.

This site uses Akismet to reduce spam. Learn how your comment data is processed.